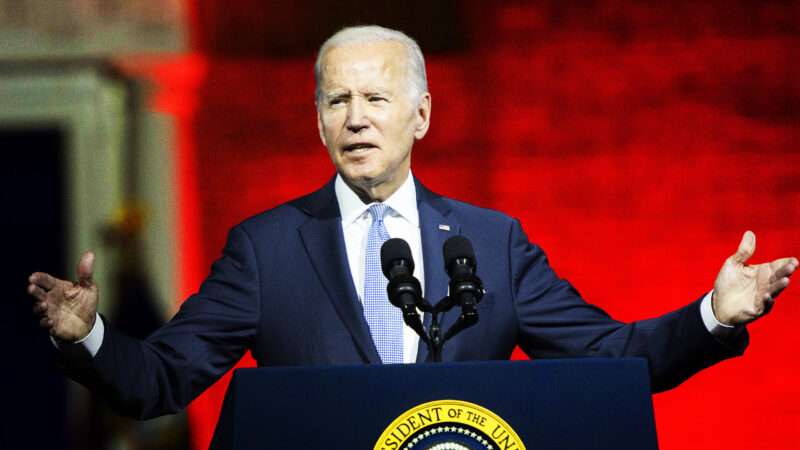 Whenever I am having a conversation with a die-hard Trump cultist for long enough, I ask the question "Why? Why do you love him so much? What did he actually do for you? He didn't follow through on any campaign promises. He went the opposite direction on several." If I'm speaking with someone who has a more nuanced response than "He talks shit to the people I don't like," it's something like, "He did a lot of deregulation," but they can never name anything specific that was deregulated.

I know Trump did lead some deregulation, but I'm not sure how much made a big difference. I started thinking about the deregulation under Jimmy Carter that I do know about. Everything from airlines to beer brewing. So now, my question is: "Is it possible that Jimmy Carter did more and better deregulation than Donald Trump, and how could we measure this?"

"In Philadelphia, Joe Biden Peddled a Competing Brand of Authoritarianism," by J.D. Tuccille

"What Capitalism Gets Right – and Governments Get Wrong," a TED Talk by Katherine Mangu-Ward

1M ago4w ago
Subscribe
Unsubscribe
मासिक+
Real debate without the hate!
N
None Of The Above

15d ago2w ago
Subscribe
Unsubscribe
मासिक+
As the United States confronts an ever-changing set of international challenges, our foreign policy leaders continue to offer the same old answers. But what are the alternatives? In None Of The Above, the Eurasia Group Foundation’s Mark Hannah asks leading global thinkers for new answers and new ideas to guide an America increasingly adrift in the world. www.noneoftheabovepodcast.org
T
The Skepticrat

seconds ago1m ago
Subscribe
Unsubscribe
साप्ताहिक
OPB Politics Now is a weekly podcast that takes a deep dive into the hottest political topics in Oregon and the Northwest. Every Friday, OPB’s political reporters and special guests offer in-depth analysis, discussion and insight into candidates, events and issues.
T
Truth vs Hype

3d ago3d ago
Subscribe
Unsubscribe
साप्ताहिक
Sebastian Payne takes you into the corridors of power to unwrap, analyse and debate British politics with a regular lineup of expert Financial Times correspondents and informed commentators. New episodes available every Saturday morning. Hosted on Acast. See acast.com/privacy for more information.
P
Pod Save the People

7d ago1w ago
Subscribe
Unsubscribe
साप्ताहिक
Organizer and activist DeRay Mckesson explores news, culture, social justice, and politics with analysis from Kaya Henderson, De’Ara Balenger, and others. Then he sits down for deep conversations with experts, influencers, and diverse local and national leaders. New episodes every Tuesday.
T
The Jason Stapleton Program

33m ago33m ago
Subscribe
Unsubscribe
साप्ताहिक+
A bootstrappers podcast for founders, entrepreneurs, visionaries and dreamers who are building businesses from the ground up without the taking on debt or selling equity. Here we cover marketing, sales, organization and mindset issues that matter to you
R
Reasons to be Cheerful with Ed Miliband and Geoff Lloyd